NOT TO SAY THAT THERE AREN'T SURPRISES AHEAD IN THIS GAME in fact, some of the most intense sequences are coming up, tho I don't think any will inspire massive essay writing like Tanehineri did. I JUST REALLY WANTED TO GET THAT ALL OUT OF ME FOR ONCE I GUESS

Just a short one this time. 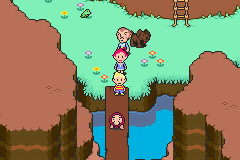 A SUDDEN RAY OF LIGHT PIERCES THE DARKNESS

A MR SATURN IN A SCARF

JUST WHAT I NEEDED

The same Franklin Badge from EarthBound that Ness had?

NO DON'T GO YET

FLINT WHERE DID YOU GET THIS?

Hee hee, the Mr. Saturn didn't leave after all! This was apparently a programming bug originally but Itoi thought it was hilarious and asked them to keep it in.

thud as i fall from my chair clutching my heart

BELIEVE IN YOURSELF also food

YOU GUYS ARE SO UPSETTING

duster as usual my strongest combo-er, aw yeah. Although actually, I mentioned before that everyone makes a sound when they hit the enemy, so each character has a set of sounds from which three are chosen whenever you attack. So for Boney, one time when you attack it might go woof bark yip woof bark yip, and another time it might be grr yip woof grr yip woof, something like that. Anyway, Duster has a set of these just like everyone else, but some coding error actually stops his attacks sounds from randomizing like everyone else's, so he'll always do the same three bass noises when he hits. RANDOM TRIVIA

BUT HA HA, I CAN DO IT WITH LUCAS TOO! Because I am awesome.

Aww yeah, lookin mystical. This is Lucas's ultimate weapon I think, a rare 3 or 5% drop off the Heftyheads. I've never gotten it until now. :O I'M FEELIN LUCKY

I THINK I'M GONNA SEE IF I CAN GET SOME MORE

Boney and the frog have a chat

alright let me handle this

fire in the hole

tell me your secrets, vines

hey did we miss anything

THE REST OF US ARE JUST GONNA WATCH

That White Pigmask also has a rare drop! But I wouldn't try to get it here, he shows up again in the next chapter and you can fight him as many times as you want there.

Lucas and Boney so even, haha.

I wonder what happens during these psychic flashes.

OMG COMMANDER ARE YOU OKAY

Duster why are you fidgeting

Another reason you might want to practice on the Heftyheads/Negative Man is because that same Strong Man theme also reprises for the Masked Man, albeit with a few tricky shifts.

Anyway as with other battles, you'll want to up your defense, but don't throw up any shields, since the Masked Man will just use the shield killer and then nail you with a PSI attack in the face. This is one reason why you might want to level until you get Lucas's Lifeup Gamma, since that way you can quickly heal everyone in your party and focus on attacking. Otherwise this gets a lot trickier.

I AM THE COMBO MASTER

Not quite as bad but still these attacks will eat up big chunks of your HP if you're not careful.

I'M TELLING YOU, IT'S WORTH WAITING

For the heck of it, let's see

Man you too white pigmask

i thought we were bros

man where can i get some of those

duster and kumatora eyeing lucas but not saying anything

darn it A LITTLE LATE

Sudden flashbacks to Link to the Past.

I guess sorry I was zoning out for some reason

NO LET'S HAVE A PICNIC INSTEAD

Wait I thought you guys were immortal, but there are generations of you? NOW I'M CONFUSED

maybe they just rebirth every now and then like phoenixes

I'm feeling less and less confident about doing this.

WITHOUT LOVE, HOW CAN YOU ACCOMPLISH ANYTHING

Haha, not unlike when Ionia taught you PSI in the first place, just turning you around and then backing up a few paces.

And all of a sudden, we get control of Lucas! MUST TALK TO EVERYONE

(though, if you look at that one vision on tanehineri as a manifestation of his doubt over whether or not he's really committed, then maybe he's over it! IT'S UP TO YOU)

Lucas looking kind of afraid and unsure that he can do this, Duster all "don't worry I'll be with you all the way I promise, you can trust me" to try and reassure him. Awwwww

why are you making me do this

IT'S NOT WORTH IT

yeah what's the deal with them anyway, where are they

DARN IT WHY DO I KEEP DOING THIS

Kumatora lowers her head, like she's about to say something...

AND SO ENDS THE LONGEST CHAPTER

WHAT WILL HAPPEN NOW? YOU'LL HAVE TO STAY TUNED TO FIND OUT