My life my love and my lady

It's possible I could cram these two segments together into one entry, but in the end I decided to split them up, in part because I know I'm going to tl;dr like crazy for the second half SO WHY NOT DEDICATE A WHOLE ENTRY TO THAT, MAKE IT ULTRA FOCUSED

So these next two are going to be a bit shorter than the others BUT STUFF STILL HAPPENS, SO

WHERE WILL OUR GROUP HEAD NEXT? 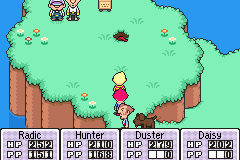 AFTER ALL THIS TIME

Rope Snake you're sort of an odd duck aren't you

NO DON'T GO COME WITH ME

WHAT IF I NEED TO CROSS A TWO FOOT GAP

ALEC HE'S RIGHT BEHIND ME

Unless this is about Claus? Alec what is your deal

ACTUALLY let's take this opportunity to go on a speculative tangent, as usual. This is the first time Duster's been back in town since he got his memory back, so this is also the first time that he's seen that his house was demolished to make room for an old folk's home. Which means that Duster is actually homeless now, which is kind of messed up. Can you imagine how surreal that'd be, to come home after being gone for three years and your house is just gone?

Not only that, but unless Wes stashed it all somewhere when the house got destroyed (heh, maybe behind the house with that thunder bomb box), all of Duster's stuff is gone too. Clothes, pillows, toys, souvenirs, books (?), pictures of his mom, all gone. Man, can you imagine who weird it'd be to go in here as Duster? Just have practically nothing left of your old life at all? You wake up one day and poof, it's all just gone. And no one else seems to notice or care, like it's always been gone. You didn't even get to see it happen or do anything about it (there's that helplessness theme again!). And it's not like he can stay with Wes like he used to, he's not old enough for the home. It's not a problem so much since as it is he's on a quest with Lucas and all and I bet Lucas would let him stay in his house, but still man, what a terrible situation to be in.

Related, I also wonder if Duster had a weird feeling of deja vu if you come back here in chapter five when he still has amnesia. Walks in and just feels strangely sad and he can't place why, a weird feeling of loss that he can't source. Not to mention how strange new Tazmily must look to him after he gets his memory back in general. Lucas just explaining all this stuff to him that he saw get built, how it all came to be over time and to Duster all this just happened all at once. Not unlike how the player experiences it, haha.

GUESS WHO I FOUND

i'm gonna project my personal theories all over this conversation, i apologize in advance

WHAT COULD BE HAPPENING IN THIS PAUSE

Personally I picture Wes sort of startled and studying him to see if he's acting like he used to, and Duster with no idea what to do or say so he's just standing there feeling/looking awkward which incidentally is exactly what proves to Wes that it's really him this time.

OR I'M A DUMB NERD AND THEY COULD BOTH BE ALL :D AT SEEING EACH OTHER AGAIN, IT'S UP TO YOU!!

duster just WOW YOU DIDN'T CALL ME A MORON MAYBE I'M NOT IN TROUBLE :D

I wonder if Wes just snaps out DUSTER! like a command on instinct since he does it a lot.

That's right Wes I trapped you in a corner now you HAVE to admit you're happy to see him again and care about him where he can see it, IN YOUR FACE

True again - Just like the other convo in chapter five, this is totally optional! You can skip this entirely if you want (or just didn't think of bringing Duster back here), which would make it so that Duster and Wes haven't seen or spoken to each other at all for the past three years+current game and they didn't exactly part on the best terms. Keep this in mind for the upcoming segment.

What, no thanks for Boney this time?

or i swear so help me

WASN'T IT ALL WORTH IT

duster like wow that went way better than i expected

Beautiful. And sort of reminiscent of the For Sale sign message in EarthBound after you finish the game. :o

Haha so THAT'S why the mole was in such a bad mood last time.

NO I WANT TO WATCH THE LATEST CHIMERA FLICK

old dude stop popping up in my hot springs

Haha wow I didn't even know these guys were back here.

ALL MY FONDEST DREAMS HAVE COME TRUE

don't give me the cold shoulder, pigmasks

as the crab said, you just walk right into it

takes a step back

The theme for the ocean being Oxygen of love, sort of bubbly and weird as usual. Note the meter at the bottom of the screen! That keeps track of your oxygen, so this area means you need to keep an eye on that meter and refill before it gets too low, which makes it way more annoying than it would be otherwise.

Also, while you're down here, everyone's bobbing and floating around, and they shift from side to side like there are tides pulling you, which is a really cool detail but also makes it kind of annoying to get around at the same time.

BUT HAVE SOME GIFS!

i don't know about this

wow what a terrible angle for that shot self, way to go

I MEAN JUST LOOK AT BONEY

I actually thought for a while that Duster didn't blush (which would be sort of... odd), but he does! He just flushes all over his face instead of on his cheeks because he's a big weirdo apparently.

anyway time to fight some beachballs

For Kumatora only! Maybe she's a Virgo. :O Incidentally, only Lucas can equip the Gemini bracelet, which could mean he's a Gemini or maybe it's just SYMBOLIC who knows. I went and looked but Duster doesn't have any specific zodiac bracelet only he can wear so I guess we will never know.

As a side note it costs you precious oxygen to pin down these fish to talk to them since they're moving and you're constantly drifting all over the place. BUT I NEED TO TALK TO EVERYONE

EYE FOR AN EYE

NO I SPENT TOO MUCH TIME TALKING TO THE FISH WHYY

What would a siren beetle even sound like underwater?

HEY RED THINGY CAN I SEE THAT PRESENT

You know I picture roe and I picture like... little balls like you get on ikura sushi. I AM UNFAMILIAR WITH THIS KIND OF ROE

A STRANGE CREATURE, YOU DON'T SAY

Be warned if you decide to take this guy on (this miniboss is optional) - he can hit really hard, and hit multiple people at once. IT IS NOT A PUSHOVER

nooo stop dancing on me

A TERRIBLE WAY TO DIE

Awww yeah, so worth it. This is probably the best hat you can find for Lucas, so it's worth going out of your way to get it. KING LUCAS, RULER OF ALL HE SURVEYS

Itoi just cackling to himself

WE SHOULD BE BROTHERS

Suddenly I miss the Spathi.

NO YOU HAVE NO IDEA WHAT YOU'VE JUST UNLEASHED

I swear this machine is broken just to mess you up, it takes time and air to get to these and finding this broken one MIGHT TAKE TOO MUCH TIME

THEN YOU HAVE TO START OVER

LOOK HOW MUCH OCEAN THERE IS gee golly

don't look, it just encourages him

So for the first time I went back.

Or also known as what Duster doesn't have anymore! Ha ha, just kidding Duster! You are homeless though.

After much longer than these screencaps make it look

THE ROCK LOBSTERS HAVE TAUGHT ME A VALUABLE LESSON

HA HA HAHAHAHA okay fine i'll give it back

Another reason I don't bother - this reward kind of sucks. Money really isn't a big deal. AND YOU DON'T EVEN GET A WARM FEELING IN YOUR HEART FOR IT

ah well, a good deed is its own reward

and thank YOU says the merman

then he was suddenly attacked by an octopus

the possibilities are endless

HANG IN THERE, SAVE FROG

CMON GET OVER HERE, I JUST GOTTA GIVE YOU KIDS A HUG

This boss can be a serious pain in the butt depending on how long you've been wandering around. There's no place to heal in the ocean and it's easy to run out of PP or items dealing with all the other enemies, so by the time you reach this guy, you could seriously be real drained. I think this may have happened to me the first time, haha. AS A RESULT, TRY AND BE CONSERVATIVE WHILE GOING THROUGH the hot spring egg trick is a good idea to fill up everyone's pockets cheaply

This attack really sucks because it hits multiple people and also offense down won't affect it, it'll still do a big ol chunk of damage. MIGHT HAVE TO SHIFT UP YOUR STRATEGY A BIT or at least try to make this real quick

YOU ARE NOTHING TO ME, RHYTHM MECHANIC!

And I missed it like an idiot but as you can probably guess Lucas lost all his items and health too. NO YOU JERK I WAS GOING TO TREASURE THOSE TRIVIA CARDS FOREVER

The mermen helped me after all! THE LEGENDS WERE TRUE

Kumatora ain't got time to mess around

It's sort of hard to catch this but when Boney got up he shook himself dry, awwwww

Which wakes up Duster, haha

Or Tanehineri island in Japanese, which still tends to be what I default to when I think of it, durr durr.

DROP ALL YOUR VALUABLES IMMEDIATELY

THE FROG WAS TELLING THE TRUTH!

ALL MY ITEMS NOOOOOOOO

tho i've still got all my key items at least, so if we find a cliff by god i will staple the heck out of it

Looks promising! The theme here is Tanetane/Tanehineri Island, just fairly chill with heavy emphasis on the rhythm, island-y if you know what I mean.

how dare you sir

SOMETHING BAD'S GOING TO HAPPEN, ISN'T IT

whatever gets you through the day

or keeps you from being digested alive i guess

YOU LOOKIN AT ME

YOU LOOKIN AT ME

you look sort of unhappy to be here

NO WAY THAT COULD HAVE BEEN AVOIDED

But hey, let's do something else!

I'm picturing it just diving underwater and vibrating a lot.

WILL I SEE PAISLEY HORSES?

He's not a palette swap shhh

Get cool gold stripes, not so bad.

I DEMAND AN ANSWER

god i'd eat that, i'm so hungry. i need to stop doing these when i'm hungry

A mushboom! Or perhaps a Puffstool? It even spreads spores!

Let's also check the memos! while I avoid the inevitable

So sayeth the prophecy

What, nothing about the Saturns themselves? WHAT A RIPOFF

Did the mole cricket write this entry

SAY NO TO DRUGS

well in that case

i'm not a mycologist

WILL I EAT THE MUSHROOMS???

I GUESS YOU'LL HAVE TO FIND OUT NEXT TIME! when mother 3 decides to get real.