I forgot to put up the HQ tracks from Chapter 6! So here you go, haha. Not that many but still some pretty ones regardless. The Love Theme is usually worth the price of admission. 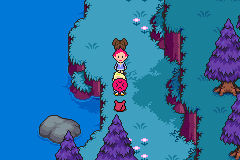 Suddenly a pink loaf of bread!

All in a days work

JUST RAINING CALLBACKS ALL OF A SUDDEN

You may recall the mole cricket from the prologue, aka the last time Lucas was ever truly happy. SINCE THEN IT'S ALL BEEN DOWNHILL

Oh man oh man this is gonna be intense

Haha, I recognize these neon walkways! More and more Earthbound memories, how peculiar. The music here is even reminiscent of EarthBound with a familiar BWEEEEP wooooooop high pitched noise you may recognize from other caves.

you eyein me, lotus root

I'M NOT SURE I'M PREPARED FOR THIS

THE HARDEST BATTLE OF MY CAREER

NO YOU JUST NEED TO BELIEVE IN YOURSELVES

I SUPPOSE I shouldn't eat out your eyes

MAKE SURE YOU EV TRAIN US PROPERLY

I really relate to this character.

too late, he's already eating one of my nut breads as we speak

BUT I WANTED TO SHOW HIM TO EVERYONE

I honestly don't know very much about mole crickets for real.

protoplasm? A DOG? WHAT??

As long as I never see them again

do not feed mechalion near open flame

NO NOT POWER CORDS

i like how the root looks progressively horrified as it's eaten alive, thanks for that mother 3

I'D CHITCHAT WITH YOU ANYWAY

Aww I didn't even notice this one was green at first, haha

LIVE THE DREAM, SAVE CRICKET

Can't argue with that

Lucas however is a pillar of strength and bravery

Doesn't this work on any maze?

Dumpling is slang for something isn't it

ALRIGHT, SINCE YOU GUYS ARE SO SINCERE ABOUT IT

Went to go store some stuff and

you can't make me

Anyway, like pretty much all the crickets tell you, to get through the maze just turn at every turn. There aren't any items or enemies to worry about SO TAKE YOUR TIME IF YOU LIKE

Getting lost here would be super annoying, dang.

And the music playing here?

It's Snowman, of course! The theme that plays in all of the Mother games when you're in a snowy area. I assume you know by this point that music is sort of a BIG deal to me, so when I finally got out of the cricket hole for the first time and stepped out on this big mountain and heard Snowman, I had to take a second to be like aaaaaaaaaaaa omgggggg snowman aaaaa

Also caught a brief snip of Kumatora's idle animation, where she yawns. :B

IT WASN'T ON MY SCHEDULE BUT

Haha and the snowmen here are shaped like Ness's snowmen in Magicant!

I see what you did there

BY THE WAY ALL THE ENEMIES UP HERE HIT PRETTY HARD

I guess the Chilly Dogs and yetis leave Lydia alone most of the time, haha.

The mole crickets will follow you around from now on to sell you stuff if you want, haha. It's pretty handy.

A pretty ribbon for Boney, yes

Awww but you look kinda cold too Lydia. I should make a gif of this.

I DIDN'T WANT TO KILL YOU ANYWAY BUT NOW BUNNIES TOO

Lydia with the big heart

NO LYDIA YOU'RE GREAT YOU HAVE TO BELIEVE THAT

If the time sounds like a whole bunch of rumbling shaking crashing noises than sure.

I'd go look but it's so cold out there

NO THE SOUND OF A NEEDLE BEING PULLED

And the Pigmask theme kicks in

Lucas you have to know, don't you?

THE COMMANDER HAS WINGS

But instead all I get is a Mechorilla, boo.

And now finally we hit the other half of the SSBB track, Smashing Song of Praise! With a doodly little bit in the center meant to throw off your combos, darn it.

More than ANYTHING, defense up is really important this battle. When I was first playing, this was actually the first battle where I really realized how important all the stat buffers/debuffers were, because the Mechorilla will WRECK you if you do not pump your stats. I'M VERY SERIOUS ABOUT THIS.

You might assume that PK Thunder would be a good idea and it is! For two or three turns, then this happens.

Anyway, as mentioned, raise your stats, lower the Mechorilla's. However, depending on what order you decide to pull the needles, you might not actually be able to lower the Mechorilla's stats. One time I went through here without Kumatora or Duster, and man it was ROUGH because you have no idea how useful Offense Down is until you don't have it anymore. Also losing Kumatora's Lifeup was hard as well. It's a tough battle with just Lucas and Boney, no joke. I DID IT THOUGH by the skin of my teeth, haha.

If you do things out of order, you could actually come up here with a full party, but I've never actually done that. :O I bet this guy would be a lot easier with Duster, haha. SOMEDAY I SHOULD TRY IT.

So many different paths in Chapter 7.

Wrecked by a pigmask ship, what a way to go.

And inside, bunnies! They seem a bit flustered whenever you talk to them though, haha.

You remind me of someone I used to know

Awww and it all works out in the end!

So the legend of The Pigmask Magypsy of Snowcap Mountain begins

And there was a magic butterfly under his helmet! How odd. I missed this but if you try and dash in here he also yells at you, haha.

What could that tiny speck be?

And the music that played here was also a real delight for me. :D It's called A Flying Whatchamacallit, and if you played EarthBound it'll definitely sound familiar. It's very similar to the theme for the Skyrunner! I always adored the Skyrunner theme so I was super jazzed to hear this variant on it. :D ANOTHER FUN NOSTALGIC KICK, THESE ONES AREN'T SO BAD MOTHER 3

Thanks for the help, Gravey.

THAT WAS NOT THE GENTLEST LANDING

A bottle! :O But what could be inside it?

YES THE SUSPENSE IS KILLING ME

Again when I was playing this, I wasn't expecting a real direct sequel to EarthBound, and it was so late in the game, I was starting to think that there weren't going to be any Mr. Saturns at all. So when I was playing this and I saw that squiggly font for the first time you would not believe how insanely excited I was, haha. just OH MAN THEY'RE HERE
THEY'RE HERE
MR SATURN IS HERE
AAAAAA

But first let's backtrack! No one really said anything different BUT I WANTED TO CHECK ANYWAY

Back down into the Salsa pipes, wooosh

SLAM IT IN MY EYEBALLS

Man and to think if I'd just checked that sideroute the last time I was in the highway I might have been able to find... probably a bunch of roadblocks that'd stop me from going over there BUT STILL

all my wildest dreams come true

I REALLY WANTED TO SEE DUSTER RIDE THIS TABLE that was one reason why I did things out of order that one other playthrough, but I think I glitched it or something because the table vanished when I had him. Or maybe Saturn tables are not meant for Duster, which is a terrible thought.

Have to use gloves to hold the Chilly Dog up to your nails.

I know somewhere that this guy's name is a pun but it keeps eluding me.

Oh yeah, I missed the entry for this guy before because of when I broke the Pork Bean last time. SO I WENT AND GOT IT AGAIN JUST FOR YOU

It's hard to catch with the caps but the table will slide and twirl around when it hits the banana peels, haha.

Instead of advancing the plot LET'S LOOK AROUND

Backtracking to the old clayman factory and hey, it's full of robots now!

No problem, although can be annoying when they gang up on you.

WAIT NO I DIDN'T MEAN TO ATTACK YOU

Still can't go the other way it seems. PIGMASKS CLEAN UP YOUR TANK MESS

but i thought you gave me a bomb for a biscuit

i thought we were bros

GIVE ME SOME DOGGY JERKY

You can actually make some cash this way if you need to. Buy some doggy jerky or biscuits, come up here, get a bomb or whatever, sell the bomb for a profit. It seems like a bit of a waste of time though, money usually isn't a huge problem in Mother 3.

I wonder if this whole bit makes Lucas feel a bit wistful. Even the mice's dad eventually comes home, but Flint never does. NO HAPPINESS FOR YOU, LUCAS

Buddy get with the program already

Man even inanimate objects are harsh to you Lucas. SO I WAS SHORT A FEW DP, SO WHAT

LEOLEO WERE YOU ROBBED oh

ever since i blew it up, hehehe

WILL WE FIND WHAT WE'RE LOOKING FOR?

WHAT MYSTERIES AWAIT OUR YOUNG GROUP?

TUNE IN NEXT TIME!