So hey, I said we weren't quite done yet, and here we are! Mother 3 spent a long time in development and as such a lot of weird stuff was left in the coding. Some of it hints at some really fascinating possibilities for endings and battles and characters and the like. Even though it's not all strictly canon exactly, it can still add an interesting light to Mother 3 in general.

But first up, some music!

Time to finish off the high-quality version of the soundtrack!

And if you missed the others, chapter one, two, three, four, five, six, and seven.

The extras thing is mostly unused tracks from the game. Some of them are just weird variants that played in the game at odd points and some of them are unused, but one in particular is interesting combined with some of the other unused elements. It's unofficially known as the "Giygas" theme. Keep it in mind as we go along.

For some other bonuses, here's the Mother 3+ album! This one is mostly live versions of the DCMC songs, but it also has some of the older songs as well - Snowman, Pollyanna, 16 Melodies (;_;), and an absolutely heartbreaking vocal version of the Love Theme. Speaking of which, I don't think I ever posted the lyrics to the Love Theme.

No matter where I am, I will still be your life

Even now, I can see the little child's smile when I close my eyes

If I call out, I'm certain he'll turn around when my voice reaches him

Give light to the small one, who walks his path alone

Give light to the small one, who walks his path alone

UGH ;________; If you think your heart can stand it try and make it through this video if you dare (spoilers).

And here's the Mother 3i album! Mostly music from the game itself arranged into various medleys. Has some great stuff on it though! I also have a ton of Mother remix CDs I picked up lately that have Mother 3 stuff on some of them but beh that takes a lot of sorting to get through. Maybe later.

Now that the game is over, you can read this interview with Itoi about Mother 3 without fear! It has a lot of really interesting insight into the game and characters, I totally recommend it. Especially stuff concerning the final villain of the game and what their deal is. It's kind of tragic, really.

There are also some really cute bonuses at this site, though they might be a little hard to find. What you'll want to do is scroll down to the picture of Mother3i, click on the button that says "small" beneath it. It should load a little flash player with a list of the album tracks and two presents on the side. Click the the second present and you should see some extra little scenes from Mother 3 in sprite form. Some of them are really adorable (Duster in the Mr. Saturn spring! Giant Osohe ghost party!) and some are rather poignant. BUT YOU SHOULD DEFINITELY CHECK THEM OUT

Anyway, a lot of cut stuff made it to The Cutting Room Floor, but I might as well cover a lot of it here too, haha.

I might as well get to what might be the most notorious cut stuff from Mother 3. For those who played EB, you may have been expecting a horrifying/terrifying battle at the end of Mother 3 just like the one with Giygas. Instead though, Mother 3's final battle was mostly just tragic and sad. Some people were a bit disappointed - had Itoi lost his touch?

Then some people did some poking around into the files and found some unused background sprites.

I REALLY recommend watching this to see what the backgrounds look like in motion, it really adds something.

It turns out, the final battle could have been much, much worse. Since it's all beta stuff, we'll probably never find out what these sprites were meant for, but it isn't hard to paint a horrifying Giygas-like final battle picture with them, especially with the Giygas theme as above. Itoi supposedly mentioned that he originally intended the final battle to be a wordless nightmare but changed his mind when it was too upsetting - this easily fits in with that.

But here are some of the unused bgs. 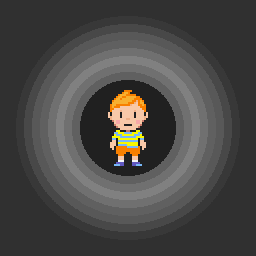 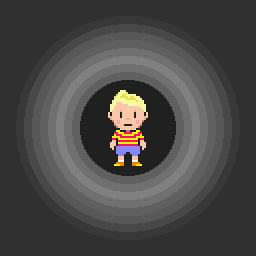 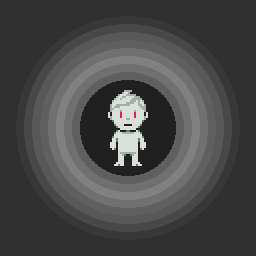 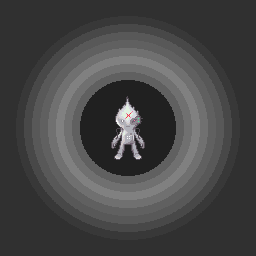 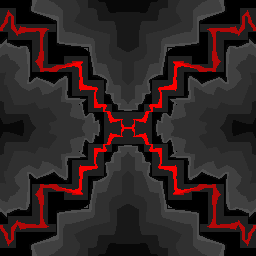 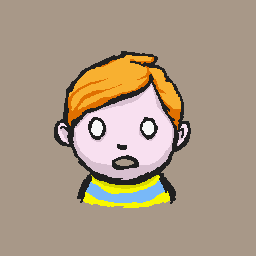 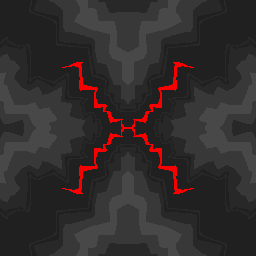 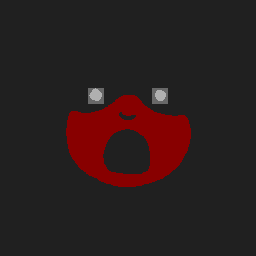 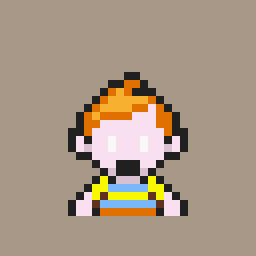 Man that one of the red screaming face always makes me shudder, uuugh. And it's EVEN CREEPIER IN MOTION you really have to see it. There are also some missing here, like a winged golden angel figure and Lucas and Claus naked, but you can see those in the video. Anyway, I believe when asked Itoi said that these images were supposed to reflect Lucas's mental state during the battle. But we may never know. Still, can you imagine how horrible this battle could have been? D:

But we're not done with the final battle yet! There are entire unused cutscenes in the game!

Of particular note here are the Flashback sequences, which dump you into the battle with the Masked Man after they're over. The common theory is that these little flashbacks were originally meant to play during the battle with the Masked Man and were supposed to reflect Claus's mental state - slowly remembering his old life and who he was, fighting his programming, that kind of thing. The one with Claus and Lucas playing jankenpon and fighting is absolutely heartbreaking though, given what happens to them in the end.

On a lighter note, some unused sprites!

Now these are probably some of the weirder ones. What could these have been used for? It looks like teleportation of some sort but how and why? Also Kumatora in a different outfit! I wonder if she was originally meant to be a Magypsy herself? That'd explain the outfit and hair color and weird magic anyway.

And more with her in her alternate clothing!

Anyway there's also unused text in the game which can also be pretty interesting. For example, here's a convo with an early version of Locria - at one point Locria wasn't meant to go traitor after all maybe. :o

•Are you the Magypsy who lives on this island?

and daughter of King Osohe.

•So you're the ones going around pulling all the

•And the Needle you're guarding here is the last

•Oh, my! Whatever is going to happen?!

•The Dark Dragon's gonna be revived once the

Needle here gets pulled, you know!

•Do you even understand?!

•What happens to the world is none of my

•Fine! Then go ahead and ignore everything

without a care in the world!

•Just don't blame me if something irreversibly

•I'm not offended at all.

•It's not good to push yourself too hard, you

One of the things about the unused text in Mother 3 is that a lot of it is unattributed, so you can't always tell who's speaking, but this one is fairly straightforward. It does make me wonder though - Kumatora seems to say she's the one pulling the needles here. Was she meant to be the main character at some point, or was needle pulling originally only her thing? Or was Lucas originally going to talk? SO MANY QUESTIONS

Probably one of the most interesting cut bits comes near the very end of the game. I've sort of referenced this a few times as we've gone along BUT NOW YOU CAN READ IT FOR YOURSELF. As mentioned though, it can be a little hard to tell who's speaking here and there, but some of the lines should be clear enough. Supposedly it's between Lucas, Duster, and Kumatora.

•There's nothing to be afraid of.

•I wonder where he is now, and what he's

•I've always had complete faith in that.

•Until I find any clues leading to him, I'll keep on

•Once you've made up your mind, there's no

•I'm always behind you all the way.

•If that old fogey's right and our memories

•Then who exactly am I?

•Was I really princess of Osohe Castle?

•Right now we gotta focus on the Needle.

•No, uhh, it's just that I have no memory of my

•I only asked 'cause I wondered what it's like to

•Even if our memories are just fabrications, the

•All three of us are mother-less.

•Talk about a big coincidence.

•My mom died a long time ago.

•My dad raised me by himself.

•He'd make food and teach me how to fish and

•He was a strict, but nice dad.

•Even if my memories since childhood are fake,

•I get the feeling that there's definitely no

•What do you suppose could be waiting up

I think the weirdest part about this to me is that it seems like Lucas is talking here in the first part. :O BUT HE'S A SILENT PROTAGONIST WHAT

Mother 3, three main characters all without mothers, IT ALL ADDS UP, EH

Strict but nice, if that helps you sleep at night, Duster. It is pretty sweet that he's so sure that Wes is his dad after all though, haha. Tho come to think of it, Kumatora talks about Ionia in the present tense... was this written before they decided pulling the needles would kill the Magypsy? Or does Kumatora just not think Ionia's really gone?

And as a bit of text you can't get normally, if you have Kumatora look in a mirror, she goes "Not bad.", haha.

There are also some unused memos in the game for whatever reason. One called "Bird of Light" goes

•That of the Dark Dragon is in

•That is what it is.

Which is odd because there's no Bird of Light like anywhere. Although that'd explain where the Hummingbird Egg came from I guess, haha.

ANYWAY I recommend checking TCRF for more, I just covered the ones that interested me here. |D

OH YEAH I remember one! In the Aeolia sprite folder from the M3 sprite dump I picked up, there are some odd sprites for what looks like a little red-haired girl in the snow.

Who is this? Why are they in Aeolia's folder? I wonder if it's Kumatora when she was young. :O (Or maybe even tinyAeolia??)

OKAY now I can't think of anything else, haha.