Surely THIS will be the final floor!

Under Construction... plays here, another take on the Chimera Lab theme, which is in itself a take on the Osohe Castle theme. Ominous!

Thank you thank you tip your waiter

embroiders all the walls

WHY DO I EXIST

Right with the pointy part of the shoe, ouch

me and all my twin brothers work here

JUST KEEPIN YOU ON YOUR TOES

Let's see how you do buddy

Feel a little guilty about this

Business pushing people off the edges, sure

Lucas staring at him uncomprehendingly

the cheesecake building's next door

IS THIS HOW YOU DO IT

even angrier than before

I think the Rhinocerocket Mk II gets Even More Intense Guys, which is a variant off a theme I already like a ton, haha. Just with some blippy parts in the middle of it.

haha with a little heart

MY RAINBOW GLOVES ARE TOO AWESOME THOUGH

I've mentioned before the few lines in this that kind of blew me away and made me doubletake, and this was definitely one of them. MOTHER 3 CONTINUES TO PULL THE RUG OUT FROM UNDER YOU JUST WHEN YOU THINK YOU KNOW WHAT'S GOING ON it does these great surprises so well, I love it.

What, don't want to swim with the hippos?

Okay THIS time this is the right floor for sure

Automated... is mostly a random sequence of beeps that will drive you crazy if you're looking for rare drops. Unfortunately this floor has a bunch of em.

Man can you imagine how overwhelming and bizarre this must look to all of them? They've never seen any kind of advanced technology before, I bet they could barely wrap their minds around the idea of a computer. AND THEN SUDDENLY

Hey, they finished the Almost Mecha-Lion!

don't look at my butt

The white pigmasks drop two items, one's a 15% chance for a King Burger, and the other's a 3% chance for an Awesome Cape. GUESS WHAT I ENDED UP GETTING LIKE TEN OF

You may remember Octobots from EarthBound!

man i would eat the heck out of that

Haha I WILL BEAT YOU TO DEATH WITH THIS CHEWTOY

Yesss PK Ground is one of the last things Kumatora learns and will come in handy in the future.

Because BAM YOUR SHIELDS ARE USELESS, HA HA

UGH NO MY MEMENTO WHYYYY

Drown yourself for the greater good!

This can go a ways to explaining the weird gibberish some of the people in town were saying before. Hey, don't these tubes look kinda familiar? I wonder if Andonuts was involved in the development of these too.

These other chickens tho, what posers

We saw before tho with people like Isaac that some people WANT to be pigmasks, so that means the army is made up of both volunteers and people brainwashed into service.

put out the ultimate chimera first

I'm not buying it

No, not his catchphrase!

This guy just wants to see one really

PULL HIM OUTTA THERE

By this point in the game you've gotta have it memorized

No Lime Koolaid for me thanks

Hey wait, are you the gum chewing guy??

i'd recommend against it

Even the Save Frog!

I wonder if these are Flint's sheep.

Man don't eat in the tube what are you doing

Joking aside can you imagine how utterly disturbing this would be to all of them, just to be walking around all these glowing tubes filled with people and animals that can all talk and move and watch you, chanting about Pokey

A fancy yellow bandana just for you Duster honey

(just like the one Wes used to call him at the very beginning??)

I wonder why Horus of all things? Come to think of it, most of the other bandanas were bird themed (Kite, Sparrow, Swallow, Chick) and Horus usually has a falcon head, maybe that's where it comes from.

None of the items gave me as much trouble as this one.

Hey, Jeff had that! I used it all the time, haha

At this point I got frustrated and quit for a bit. Then of course, in the very first white pigmask battle I get into when I reload...

WHAT well I'll take it, haha

Always so hard to decide between these

Man I just noticed that Duster's defense is like 40 points ahead of everyone else's, dang. 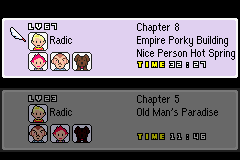 After a break and now that that's done, let's pick up where we left off.

Some people wonder if the failed space program is related to the white ship, but who knows?

And still nothing in the memo! I guess by this point in the game they'd dropped the mechanic and didn't bother writing any more.

My mental A button hammer is the best.

I DON'T GET IT

The audience is just painted on the wall

DARN IT POKEY WHERE ARE YOU

after slowly walking around

Try Kind of Hard! for the minigames, just cheery and silly.

My turn! TIME TO HAMMER EVERYONE

Or talk to my teammates instead

Duster confused by this whole idea

WIN, WIN FOR YOUR LIFE

Incidentally none of these cue cards were translated originally.

And... stop! for the game end fanfare

better do as it says

Okay this time for sure

As Lucas rolls his eyes

It took me a while to figure this out when I was first playing, haha. I did it straight and won and failed, then screwed up on purpose and failed, and I was like WHAT DO YOU WANT FROM ME

Then read up on it and i was like oh

Suddenly want to play Prof. Layton for some reason.

I VOTE WE PUNCH EVERYONE TO DEATH

As Lucas falls on his face

How's it goin over there

Shall I join you

I was admiring the cardboard crocodiles

BUT WE'D HAVE SUCH GREAT PARTIES

I am pro at rapidtapping

I like how there's a tiny scale model of New Pork City in here for no reason.

This might be the meanest thing Duster's ever said so far, haha

indulge my fist in a second

Want me to take it seriously eh

CAN'T I DO BOTH

"Mom" tattoo on one

And we even rolled out the red carpet!

And the nice couch!

I guess they all just slept on top of each other

SURELY POKEY WILL FINALLY BE BEHIND THIS DOORWAY

but you'll have to wait and seeee