You come into MY house

Current Zar note: I did this LP in 2016! I left my write-up mostly unchanged.

Last time in Mother 1 we picked up Loid and Ana and went and hung out in a haunted house. There's mysteries afoot in the desert, so let's go check it out!

what was i doing again

One of Jesus's party tricks

Look at all these little dots! Points of interest in ye olden days.

We bend our knees around these parts, boy

So here's where it starts! You can blame the robots in EB and Mother 3 on this robot here.

But why do that, let's go to the desert!

Only the most cutting edge sticks allowed here.

Look at all this PSI I have, wow.

DON'T COME NEAR ME

Sassy narrators, brought to you by Mother 1.

The music here is Yucca Desert, which you may recall as being the same theme as the Dusty Dunes Desert from Earthbound! At least, through an oldtimey radio, anyway. It's weird to think that for Japanese players, the EB track would make them nostalgic for Mother 1, and here me and so many other American players are going backwards, haha.

What a strange ocean!

That's just the kinda person I am.

Incidentally as you can probably guess the desert is huge and mostly featureless and we're going to be wandering around it a LOT.

Could this desert have something to do with Easter??

That guy didn't seem inclined to be helpful so back to wandering around. There has to be something in this desert somewhere.

Hang in there, Jimjam.

I better get to the center of this thing, I have no idea what it is or what it's for but surely that's what the game makers want me to do.

yeah you guys swell up over there, i'm gonna get my microscope and look these things up real close

what's the point of bug spray if not these scorpions?!?

The thing about Mother 1 is that it doesn't tell you what each PSI power does, so you better either experiment and write it down or look it up.

Suddenly, when you least expect it, a Dr. Seuss character

I HAVE TO GET IN THAT HOLE

IT WAS MADE FOR ME

welp, i'm not supposed to be here yet

thanks loid i couldn't have figured that out on my own

All things considered, didn't work out.

NOTHING TO DO BUT FACE DEATH

Welp I knew I'd hit this screen eventually

This screen and text is very similar to the death screen in EarthBound! So many callbacks. I'd link you to an EB entry where I died but I can't remember one off the top of my head, but I'm going to take a wild stab in the dark and guess that I died against Titanic Ant at least once, so GO CHECK AND SEE

Fine giant can robot I won't go in the cool mystery desert ruin, maybe I'll go to some podunk town instead.

oh gdit THERE'S NO HEALER IN THIS TOWN I FORGOT

Alright I was about to get peeved

Okay everyone back on your feet, cmon

Maybe I'm not approaching the can robot the right way. It sure hit me super hard, maybe the trick is to set up the reflecting shield and reflect its hits back on itself? That sounds plausible.

DON'T KILL ME PLEASE, I JUST WANT TO LIVE MY SNAKE LIFE IN PEACE

There's another tentacle around here! How odd.

Gotta be somethin down this way.

Oh man, and these things came back in Mother 3! Still disturbing back in these days as well I see.

The music here kind of startled me, it's Youngtown, or EB players may know it better as Paula's theme! In this new context, this song actually takes on a much more melancholy, kind of tragic feel than it had before when it was just associated with Paula. Maybe that's just me though. It was one situation though where the new (relatively speaking) context for a familiar song completely changed how it felt to me.

This town is filled with abandoned kids! Where are all your parents, guys.

The latest craze here in Youngtown.

Maybe God has some answers.

Oh man this line totally tripped me out because I've had this bit of Mother 1 fanart for a million years that I never understood the full context for, let's see... What a corporate shill.

I can do other stuff, like host a rager of a slumber party, aw yeah

Don't stand over me and breathe heavily next time okay

"So how much is that toy air gun over there?"

WILL I SOOTHE THIS BABE'S SORROW

I BETTER TALK TO IT

Haha, like the Pigmask in Mother 3 whose hobby was being mysterious.

why on earth does a baby know how to teleport

gonna teleport me up some banana sundaes

Mountains near Valentine eh, I guess that'd be that... dot up to the north?

Yesss it works! It's like Teleport Alpha in EarthBound, you run forward pretty fast but you need a lot of space to pull it off. Even better, I don't have to do that annoying dungeon in Magicant anymore!

WHEN WILL IT BE FIIIIIXEEEEEDDD

dabs some water under his eyes

Alright, trying to get up to Valentine did not work.

SO CLOSE, YET SO FAR

how am I ever gonna get over there

Well, that's not so bad considering how far behind you guys are.

More PSI! I am loaded up here.

Not dealing with you losers, outta here

Someone either told me about this or I looked it up cause otherwise I would've totally missed it, haha.

She caught them all :o

THERE ARE A LOT OF RANDOM ROBOTS IN THIS GAME

Oh phew, I thought this would be the can robot all over again

Okay, I have another idea! If my shield doesn't work, maybe I'm supposed to dimensional warp away from the can robot! Discretion is the better part of valor, right?

Both my plans did not work. :(

Welp might as well teleport to Magicant for free healing, since I can teleport out so casually now.

So angry about this ballet

Zap you all with a beam beam beam

After some juggling, let's get on!

The plane flies around the desert for a while playing this jaunty theme, similar to the Paradise Line. Hey, that cactus has a face! I did not notice that until I was sorting through these caps for uploading later. I want you to keep that in mind for no particular reason.

There you are again, smirking cactus.

WHAT SECRETS DO YOU HOLD

Well that was fun I guess.

So you at least get stubs for each member of your party, so you have to do this only four times as opposed to nine, but still.

And each plane ride does take you somewhere different to be fair, haha.

I'll just let you kids drive it, it'll be fine.

and it plays this intense theme while you're driving around in it.

I KNOW EXACTLY WHAT TO DO WITH THIS TANK

EAT IT, CAN ROBOT 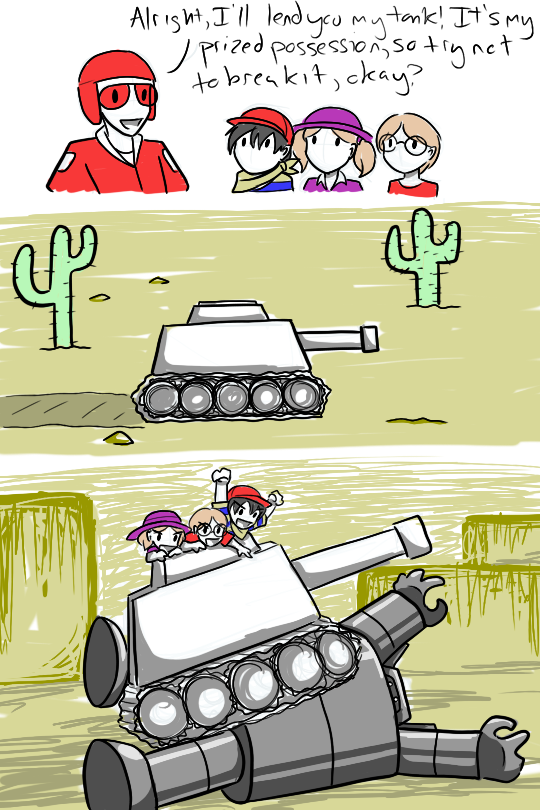 THAT'S FOR ONE-SHOTTING ME TWICE

well he probably won't miss it

WHAT ARE THE SECRETS OF THE DESERT

A windy dungeon filled with monkeys.

Haha well I'm not too surprised, a monkey dungeon showed up in EB too. And it was also in the desert!

Or is it really violent and full of too much light

I THINK YOU'RE LYING

soon i will meet my worst enemy, got it

I'LL TREASURE MY FRIENDS ON MY OWN TIME

Not that long, weirdly.

I don't know! I shouldn't have brought it up!

I actually forget if this monkey was running around or if I just talked to some random monkey and he said this. WITH THIS GAME, IT'S IMPOSSIBLE TO TELL

I should look up a map of this place.

FILTHY LIARS ALL OF THEM anyway go

Haha you can't really see it here but I'm talking to a penguin.

Do some layoffs, that'll teach em

Was it the massive testicles mask that gave me away?

It's not important or anything!

Lot of games tell people to stop, come to think of it.

I just wanted to see what you'd say, sorry

Haha, it was all worth it! Now to find the true secret of the monkey cave!

UGH AND IT WANTS THAT BOOK AGAIN

so after some backtracking

IT JUST TOOK ME BACK TO MAGICANT

WHAT A GIANT WASTE OF TIME

Least I'm picking up PSI here and there

A star man, one could say.

Huh, that was easier than I thought

WHERE DID YOU GET THAT

HOW ARE YOU USING IT

Tank guy is gone, presumably to go mourn the loss of his most precious possession, destroyed mysteriously when he gave it to three random kids and then decided not to follow up on them at all.

Then I remembered this dude and went back to check on him.

Okay, got all of these melodies so far.

I have to fight a dragon so soon? uh oh

Thanks for the hints pal. I then promptly forgot about the cactus entirely.

When you don't have enough room to run, haha.

Man don't use 1 hp attacks on me Jane cmon

GET OFF MY BACK, DAD

So as mentioned I forgot about the smiling cactus, so I figured well, I better go to the desert and systematically check every single cactus for the singing one.

So this took a while, as you can guess.

A typical threat from skeletons!

So I went to each of these cactuses and checked them, and then I used telepathy JUST IN CASE that was how I was supposed to find the cactus.

Anyway, I didn't find the cactus obviously and got tired so I stopped there. At which point I sorted through my caps and saw the smiling cactus and was like DARN IT

THAT'S THE CACTUS I WAS LOOKING FOR

So next time I'll probably head back into the desert to see if I can find that cactus, since I cannot remember for the life of me where it was in relation to that plane ride. EXCITING STUFF!